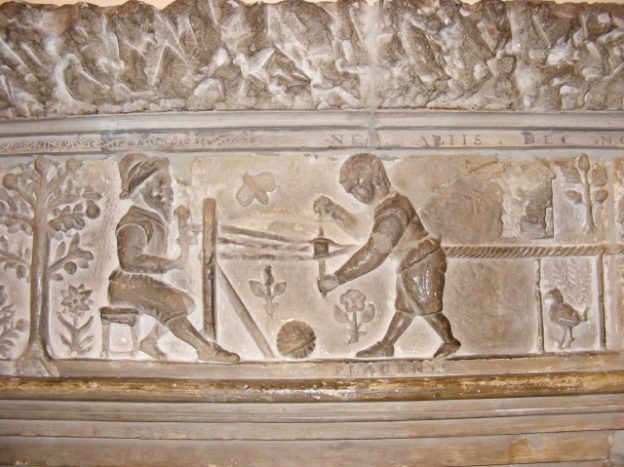 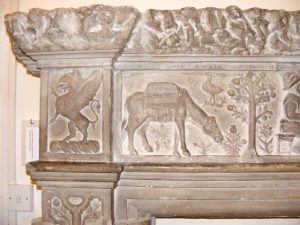 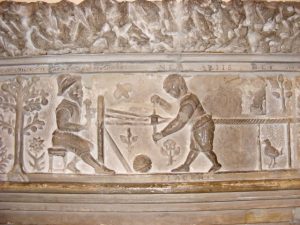 In 1855, Robert Driver Thurgood, decided to demolish his mansion in the centre of Saffron Walden, between Market Street (Market End) and 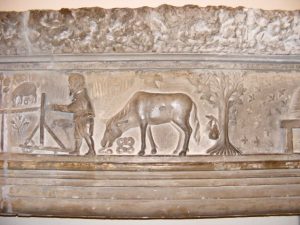 Common Hill, to sell the land to provide additional space for the town’s cattle market.

The house was one of several previously owned by John Harvey (d. 1593). Harvey was a gentleman farmer, master rope-maker, and notable as well as the father of Gabriel Harvey (c.1550-1650) a famous scholar and poet. 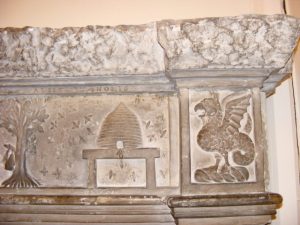 During the demolition work sections of oak panelling were removed from the house, which revealed underneath them, three heavily carved chimney pieces. One of these carved overmantels was rescued and has been on display in the museum ever since. It is referred to by specialists as one of the earliest examples of “Alciato” emblems, based on Andrea Alciato, an Italian humanist’s writings, being used in England.

The overmantel has been made from clunch, a form of limestone which was used because it was relatively easy to carve. The central section depicts Harvey’s rope-making business.  A ropewalk is shown, the area where the master roper and his assistants’ twisted hemp, jute or flax yarn into ropes and cordage. The figures shown are dressed in late 16th century clothes, with winged and tabbed doublets or jerkins, breeches, stockings and latchet-secured shoes.  Presumably the ropemaking scene is being used to symbolise the value of labour and effort, and the link to its owner’s profession. Around the rope-making scene are depicted flowering plants and what appears to be a silk moth. There is a small building and an oak tree with a pig beside it eating fallen acorns. The motto in Latin here reads NEC ALIIS NEC NOBIS (Neither for others nor for ourselves).

The scene on the left of the rope making features a mule eating a thistle, a goose-like bird perched on a single tree branch, a series of stylised flowering plants and a tree full of oranges. The motto in Latin which reads ALIIS NON NOBIS (For others not for ourselves), could refer to the idea of not benefitting from your own labours, essentially doing something for the common good. To the right of the rope-making scene is pictured a deciduous tree with birds, a swarm of bees going backwards and forwards to their straw beehive. Here the Latin motto reads ALIIS ET NOBIS (For others and for ourselves), which makes sense with the image of the bees, as their honey benefits the bees themselves as well as humans.

Beneath all three sections of the symbolic emblems, the Latin motto appears to read NOSTRI PLACENTE VNT LABOR, but there are some letters and words missing, it possibly means “Our cakes are our labour,” presumably meaning labour brings its own rewards.

The recessed panels feature a cockatrice (a mythic beast which was said to have plagued Saffron Walden before it was killed) and a gryphon segreant (combined eagle and lion), which both appear to have been used in the design like heraldic crests, as there are twisted ribbons pictured around them. Other emblems carved here include flowers, leaves, fruit and trefoils. 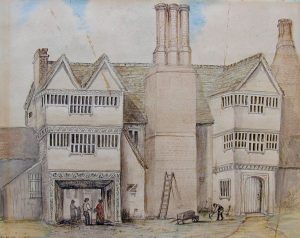 Watercolour showing the back of Gabriel Harvey’s childhood house, The Bell, showing the side which faced The Common. The house was pulled down in 1855. The sketch is by GN Maynard in 1886 based on one by Fry. 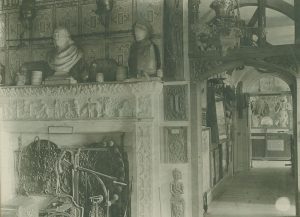 The carved mantlepiece or over-mantel