We are preparing to re-display our special ‘treasure’ case in the archaeology gallery, to include some new finds we have just acquired under the Treasure Act. These include a small silver medieval seal matrix, a metal stamp with a design to press into sealing wax and make a seal. Curator Carolyn Wingfield has been doing a little research into medieval seal matrices as part of the preparation for the display. 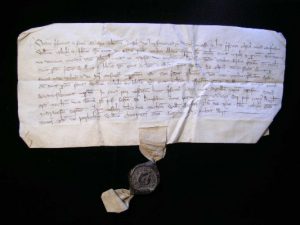 In the Middle Ages, anyone with property or money would probably need to seal official documents, or send letters in the course of managing personal and family business. Royalty, nobility and the Church had large and impressive official seals attached to their documents. People of lesser rank, such as clerics, merchants or farmers, would use small seal matrices made of lead or copper alloy to imprint a wax seal only 1-2cms across. Silver seal matrices are rarer and so we can imagine someone of some wealth and social status owned our silver seal matrix.

These small, common seal matrices were suspended by a cord from a belt or carried in a purse and so frequently got lost. As a result, metal detectorists find lots of seal matrices. The Portable Antiquities Scheme has recorded over 4,000 seal matrices on its database – 139 of them are from Essex. 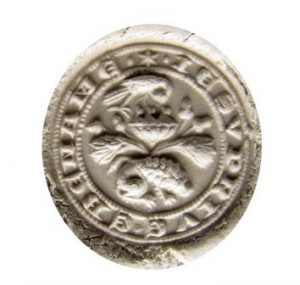 Impression of the medieval seal matrix recently acquired by the museum

Seal matrices show a wonderful variety of inscriptions and designs, though there are certain themes which were popular. Many give us the names of their owners, ordinary people such as ‘Richard son of Ralph’ or ‘Annais the wife of William Dun’. Religious symbols and portraits of favourite saints occur as well as comic ones, such as a sleeping lion with the inscription ‘Wake Me No Man’. Other inscriptions include an instruction in Latin ‘Frange. Lege.Tege’ meaning ‘Break [the seal]. Read [the letter]. Conceal [the contents]’. Carolyn’s personal favourite was a seal matrix shown to her by a local metal-detectorist several years ago. It was engraved with a comical medieval ‘cartoon’ character which had a large two-faced head, running along on two little legs. The Latin inscription translated as ‘The Seal of Nonesuch’. Clearly some of our ancestors enjoyed a joke!