In 1973, a leather trunk was donated to Saffron Walden Museum, containing the belongings of a girl named Violet Dix. Violet died in 1919, aged 10. Her belongings had been packed into a trunk, perhaps by her parents who were too upset to deal with them, and kept, untouched, until her death.

The belongings include clothes, toys, books, schoolwork, letters and material relating to Violet’s death. From these objects we can piece together a picture of Violet and her childhood in Saffron Walden. 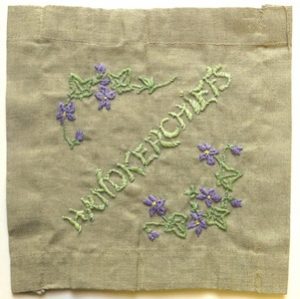 An embroidered handkerchief from the trunk

Despite her being frequently ill, Violet’s schoolwork and letters show that she was an intelligent girl with a sense of humour. In a note to her mother she wrote “If you want to know where your safety pins are, look where you told me to put them”, suggesting could get away with being cheeky. Violet was at the top of her class at school, and her writing shows skill and imagination. Included in her possessions are some embroidered items, most likely sewn by Violet in needlework class.

All of Violet’s social arrangements were made by letter, so we know that she often had friends to play with her at home, or that she visited others. She liked collecting things, and the trunk contains packs of cigarette cards, pictures of trains and cut-out paper dolls. There are numerous boxes and tins with handmade peg dolls, small toys and brooches.

Violet’s clothing includes dresses, petticoats, underwear, scarves, coats and boots. Violet’s dresses are delicate white embroidered cotton, with lace ribbon and trimming. In contrast, her underwear was made to last heavy duty cotton, with large tucks to allow for growth, and her socks are heavily darned – suggesting that her family was thrifty.

School reports and other documents reveal Violet’s poor health. She was absent from school for long periods, suffering from ear trouble, measles and coughs. In 1919, just a few days before she died, Violet wrote in a notebook “I have had a long illness, and I am not well yet. I had to go to London to a great ear specialist. And soon I have to go to his nursing home…I do not want to go”. Four days later, her mother wrote home from London “Violet got through the operation but is very bad today. They will not tell me much”. Violet died the next day. 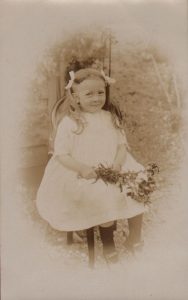 Poems about Violet’s death, written by her mother, were left in the trunk along with letters of sympathy, in memoriam cards and photographs of Violet’s coffin and grave.

It has been argued that World War One marked a shift in attitudes towards death, from the Victorian fixation with outward expressions of grief to an attitude in which death was shameful and forbidden. The material in Violet’s trunk seems to represent a society on the cusp of this shift. Whilst the photographs of Violet’s coffin and grave are reminiscent of a Victorian reaction, the family’s mourning is carried out more privately, through letters, diary entries and poems.  In contrast to many Victorian mourning cards which use “died” or “departed from life”, the card announcing Violet’s interment states that she “fell asleep”.

Violet Dix’s trunk and its belongings are a fascinating and deeply personal collection. The museum has welcomed several members of the Dix family and friends to view the collection over recent years. In 1996 a book about Violet’s trunk was published locally, and an exhibition staged at the museum, but the collection has not been displayed since. The book, Violet Dix’s Trunk: Childhood in Saffron Walden, 1910 – 1920 by G. Holman, is available in the museum shop.