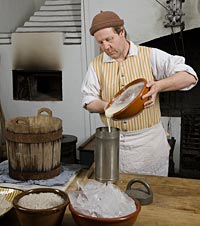 Inspired by the Summer sunshine, Jenny Oxley Collections Officer (Human History) has chosen to pick Victorian ice-cream making equipment as this month’s Object of the Month.

G.E. Read’s shop was on the High Street in Saffron Walden in the 19th century, and by the early 20th century had been taken over by T.T. Snow (Thomas Thurgood Snow and his wife, Ellen Snow).  It was known as the High Street Bakery.

The Victorian pewter Ice cream maker or sorbetiere and accompanying moulds which will be on display in the Museum this month would have been used at Read’s Shop in the late 19th century.  They have recently been donated to the Museum by Read / Thurgood family members.

There are also some step-by-step picture instructions showing how ice cream was made using the sorbetiere.  The moulds you will be able to view on display, are particularly elaborate in design and in the shape of a traditional jelly moulds, as well as quinelle and fruit shapes.

In the Georgian and Victorian periods ice cream desserts could be decorated with saffron, cochineal, spinach, or some other natural colouring to add visual flair, a treat for the eyes as well as for the taste buds.

Visiting the Museum in August you will also be able to see adverts and photographs, and extracts of account books, related to both the Read and Snow shops which were in the High Street. 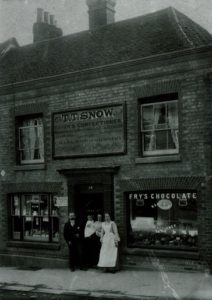