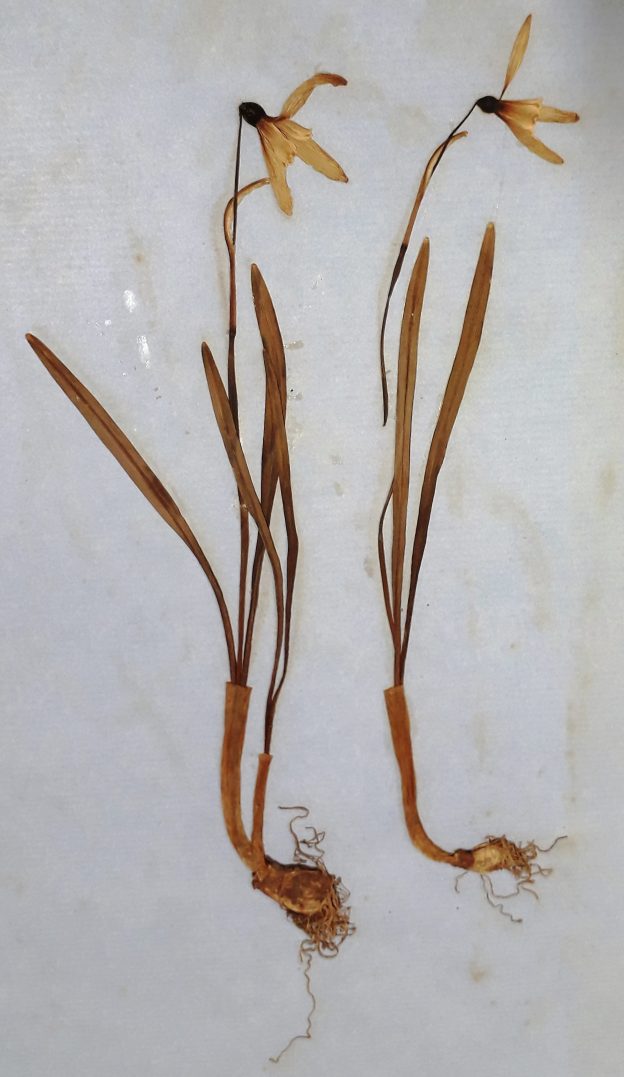 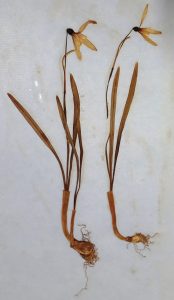 These Snowdrops from Littlebury in Essex are January’s ‘Object of the Month’. The snowdrops were collected by George Stacey Gibson in a meadow at Littlebury in March 1864, so these preserved plants are 156 years old.

George Stacey Gibson of Saffron Walden published the first Flora of Essex in 1862. This is an illustration of Snowdrop, Galanthus nivalis, from volume five of the Museum’s copy of his flora.

Specimens of these snowdrops are preserved in Saffron Walden Museum’s herbarium collection of dried plants. The herbarium contains plant specimens collected by botanists in Essex and it is now more accessible at the new museum store. The collection is an invaluable record of the plants found in this region and has been used to produce Floras for Essex and Cambridgeshire.

To preserve the plants they were pressed, dried and mounted on a paper herbarium sheet. The plant name, the location where it was found, the name of the collector and the date were written on the sheet, or a label which is fixed to the sheet. Each herbarium sheet represents a biological record of where a plant species was found at a particular time.

A Flora is a book that describes the plants that grow in a geographical area and records where they are found at a certain time. Research using the Museum herbarium has plotted how the number of plant species and the distribution of plants have changed over time because of habitat loss, changes in management of the countryside and pollution. The Museum’s copy of the Flora of Essex by George Stacey Gibson, 1862, includes so many beautiful coloured illustrations of plants from English Botany  by James Sowerby (1757-1822) that it has expanded to six volumes which are each bound in green leather.

The snowdrops were chosen by Sarah Kenyon, one of the Natural Sciences Officers at the Museum. These beautiful little plants produce their white flowers from January to March and they signify that spring is on its way. Snowdrops grow at the entrance to the Museum on Museum Street. We look forward to welcoming you back to Saffron Walden Museum later in 2021. 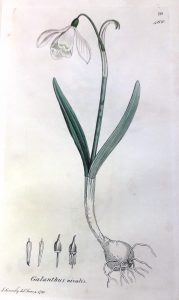 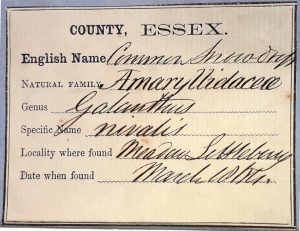 A herbarium sheet of snowdrop plants collected at Littlebury in 1864.

Snowdrop Gibson Flora. An illustration of snowdrop in the Flora of Essex by George Stacey Gibson, 1862.

The historic label for the herbarium sheet.