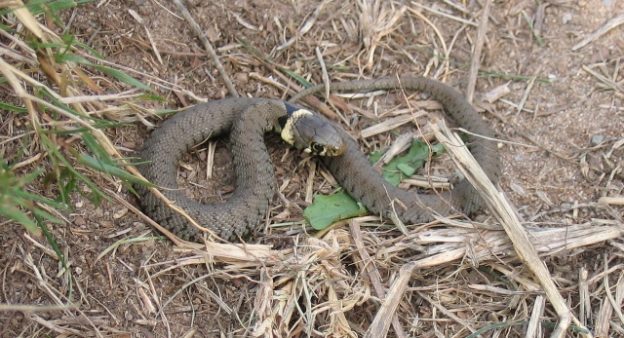 Skin of a Grass Snake

Our ‘Object of the Month’ for May is the shed skin of a grass snake, Natrix helvetica, that was found at Wimbish Green, Essex in July 2001. It was chosen by Sarah Kenyon, one of the Natural Sciences Officers at the Museum.

Snakes are reptiles and the grass snake is Britain’s longest snake, measuring 90 to 150cm in length. They are grey to green in colour, with a striking yellow and black collar around the neck, a pale belly and black markings along the length of the body. Grass snakes are found in England and Wales in wetland areas, grassland, farmland, woodland and gardens with ponds. You may spot one from April to October, when they go into hibernation until March. Don’t be scared if you do see one, because this snake is harmless. One summer I saw a grass snake swim across a pond at the Gardens of Easton Lodge in Little Easton. They are often found near water because they eat amphibians (frogs, toads and newts), fish and small mammals or birds.

Grass snakes are Britain’s only egg-laying snake. Females lay up to 40 eggs in June or July in rotting vegetation, like garden compost heaps, in which the heat acts as an incubator. The eggs hatch into tiny versions of the adults in the late summer months. To grow in size a snake will shed its skin in a process called moulting. Male grass snakes shed their skin twice a year. Females shed once a year before laying their eggs. The Museum’s snake skin is 125cm long. Grass snakes live for 15 to 25 years. In the UK they are protected by the Wildlife and Countryside Act (1981), so it illegal to harm or sell them. 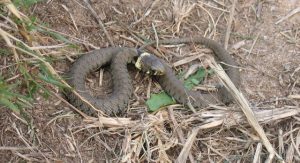