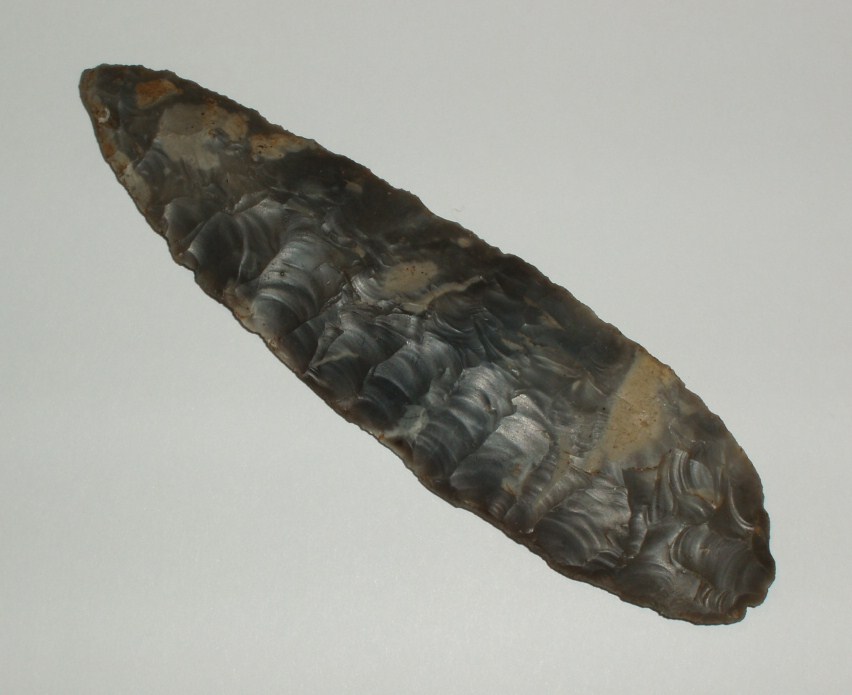 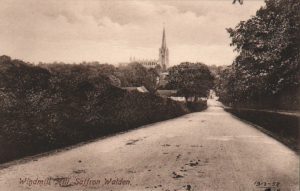 Photograph of Windmill Hill, taken in about 1900 (from the museum’s collection)

Found on Windmill Hill in 1863
The flint dagger was found by workmen on Windmill Hill, just north of Saffron Walden, in 1863. They were digging a road from the main road to The Vineyards, the new residence of William Murray Tuke. Tuke was a banker and a trustee of Saffron Walden Museum. In 1871 he gave the dagger to the Museum but it was over a hundred years before the date and significance of the dagger were identified.

An identity puzzle
At first, the dagger was thought to date from the Old Stone Age, because it has some similarities to very fine flint tools produced over 16,000 years ago by the so-called ‘Solutrean’ culture (named after a French site).
We now know of hundreds of other flint daggers and knives like the Windmill Hill dagger. They date from the end of the Neolithic (New Stone Age) and beginning of the Bronze Age, around 2,500 – 2,000 BC. Both flint and metal (copper and bronze) daggers were in use at this time, though they are never found together. Perhaps different groups favoured different materials.
Archaeologists use many terms to describe flint blades; the Windmill Hill example could be called a dagger or a knife. It would have had a handle of wood, bone or antler, and must have been a prized possession. 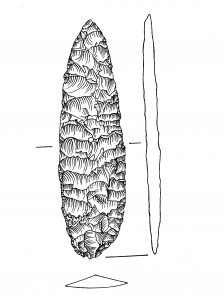 Drawing of the flint dagger by Hazel Martingell

Fantastic Flint!
The technique used to make flint artefacts like the Windmill Hill dagger is known as ‘pressure flaking’. A flint blade was struck and shaped, then finished by levering off tiny, regular flakes by applying pressure with a pointed tool. It takes great skill to produce such thin and sharp blade in flint.

To see another example of fine flint-working from this period, follow this link to the website of the Wiltshire Museum, Devizes and Phil Harding’s favourite object, the remarkable ‘Stonehenge Dagger’, which was found in a burial near Stonehenge.

We do not know why or how the Windmill Hill dagger came to be buried, but it is unlikely that such a precious object would have been lost by accident.

You can see the flint dagger on display in the Museum until 30 November 2016.