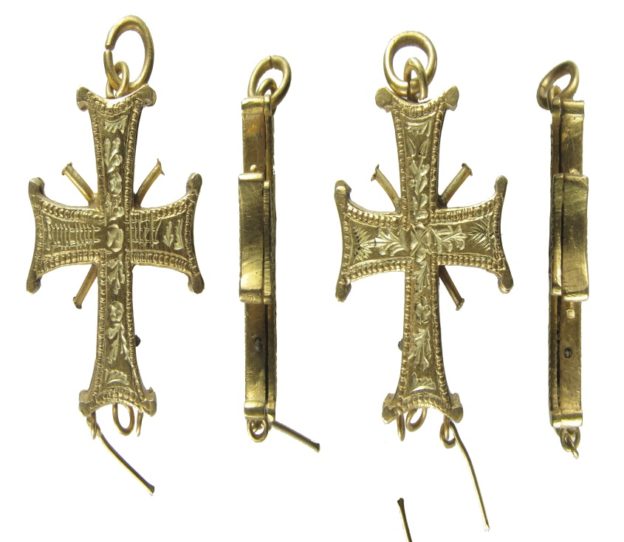 The Puzzles of the Pendant

November’s Object of the Month is a very special piece of medieval jewellery: a gold reliquary pendant in the form of a cross. It was found by a metal detectorist in Farnham parish, Uttlesford district and reported under the Treasure Act 1996. Saffron Walden Museum Society Ltd was able to purchase the reliquary pendant thanks to generous local donations and grants from the Art Fund, the ACE / V&A Purchase Grant Fund and the Headley Museums Archaeological Acquisition Fund 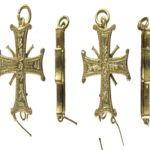 The Riddle of the Relic

A reliquary is a special container made to hold a relic – something which is held to be sacred because it was associated with a saint. It might be a piece of bone or hair, or a fragment of an object touched or used by the saint, such as clothing. Objects associated with holy sites were also revered, examples being splinters from the Cross or fragments of stone form the site of Christ’s crucifixion. In medieval times, people believed that wearing a relic would protect them from all manner or illnesses and misfortune. Religious jewellery and portable items are important to many people and cultures today.

The Farnham reliquary pendant is hollow and designed to hold a relic. The back is still closed, secured by a tiny iron pin, but an X-ray taken at the British Museum did not show any obvious signs of a relic inside.

What do you think might have been inside our reliquary pendant? Send your ideas on Twitter, Facebook or add them to the display in the Museum.

The Puzzle of the Pins

The reliquary pendant originally had a gold pin in each angle between the arms of the cross; one pin is now missing. There were also three gold pins hanging from the foot but only one of these pins survives.

We think the pins would have held pearls, or small round polished gemstones. There are examples of other pieces of medieval jewellery with pins, and some have pearls still in place. 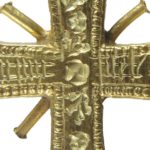 Look closely at the front of the reliquary pendant and you can see some writing along the horizontal arms of the cross. It is in a late medieval script known as Black Letter which is difficult to read. So far, no one has been able to read it. It may not be a real inscription, but just a series of lines made to imitate writing.

There are other pieces of jewellery dating from the 15th century which have black letter inscriptions. The inscriptions are usually a message to a loved one. Examples include a gold pendant cross from Tamworth, which carried a French inscription ‘de cuer’ meaning ‘from the heart’. Another gold pendant cross, from Newport Pagnell had two Latin phrases: ‘crux florat’ meaning ‘may the cross bloom’ and ‘amor malum’  meaning either ‘love fruit’ or possibly ‘ love – evil’ (a contract of opposites).

So was our Farnham reliquary cross pendant purely religious or also a token of affection given to a loved one?