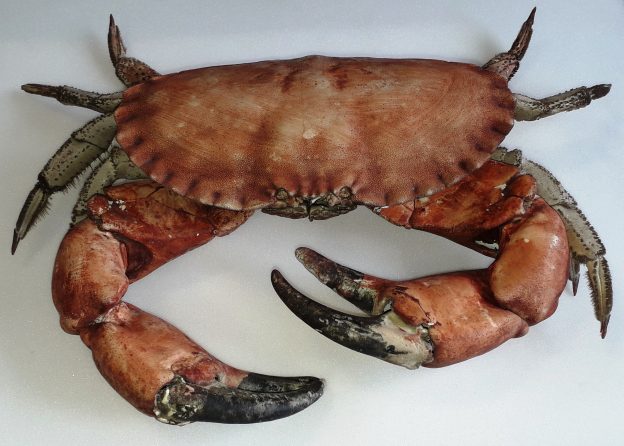 We are celebrating staycations with September’s ‘Object of the Month’. The shell of this Edible Crab, Cancer pagurus, was found on the coast of Britain before 1970. It was chosen by Sarah Kenyon, one of the Natural Sciences Officers at the Museum.

This is the largest species of crab living in the seas around Britain. The shell, or carapace, can reach a size of 25 cm across. Edible Crabs may live for twenty years. This large orangey-brown crab can be recognised by the pie crust edge of its thick, oval shell and the black tips on the end of its claws.

Edible, or Brown Crabs, live on the lower shore and in the sea, down to a depth of 100 metres. They can be found hiding under rocks on rocky shores, or amongst weeds off the shoreline. The predator comes out to hunt for mussels, whelks or smaller crabs and will dig in the sand for razor clams and other shellfish.

To grow in size crabs shed the shells that have become too small in a process called moulting. Female crabs move inshore to moult and mate with male crabs in late spring. They move offshore again later in the summer and fertilise their eggs in late winter. The eggs are carried around for about six weeks before they hatch as planktonic larvae. Young crabs can often be found sheltering amongst the rocks on rocky shores. Large, older males move great distances from the shoreline to depths of 100 metres offshore.

This species of crab is the most popular one to eat in Britain. To find out more visit the Museum in September to see the Edible Crab on display. 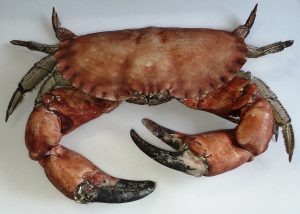