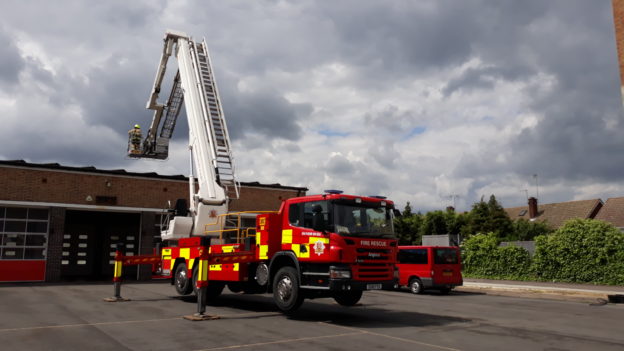 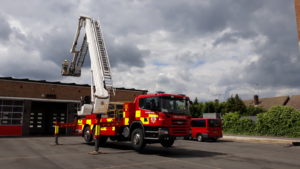 Scrapbook of the time prepared by Chris Phillipson covering the 1950s onwards, shows the fire-fighters at Station Echo 79 (now known as Station 85) – Saffron Walden regularly attending events such as the Carnivals and Essex Shows at Audley End Park. The local brigades often took part in local talks and demonstrations.  They had floats at the hospital carnivals and marched in the Remembrance Day parades.  Held annual meetings and many social events, including formal dinners and long service medal ceremonies.

Firemen Fight Against the Ice

Just days before Christmas, severe ice froze the uniforms of firemen solid as they fought to save the 15th century Clavering Guildhall and the family inside. Crews from Saffron Walden, Stansted, Thaxted and Newport struggled to get water from the nearby hydrant which had frozen. They ended up using water from a neighbouring property’s swimming pool, smashing their way through nearly a foot of ice to get to the water. Sadly the roof of the historic Guildhall collapsed, but thankfully the family escaped unharmed and the fire was stopped from spreading to adjoining properties.

A commemorative plaque commemorates the rebuilding of the masonic hall on Church Street after a tragic fire there on the 10th July 1999.

A fire at the Saffron Hotel in 1999 brought back bad memories for many of the 1969 Rose & Crown fire. Fortunately, after 90 minutes the fire was brought under control and contained in the kitchen.

Fires remain a regular aspect of local life, as documented in local print and social media.  Newport News has a regular detailed feature about the Newport Fire Brigade’s activities, which show that these days fire brigades attend a much broader range of incidents particularly complex road traffic accidents as much as they deal with outbreaks of fire.