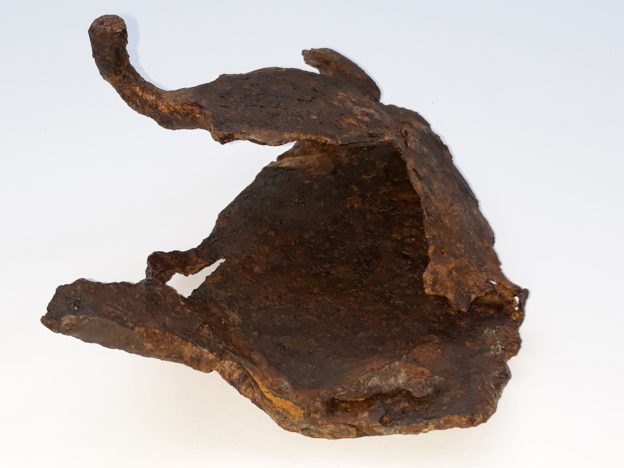 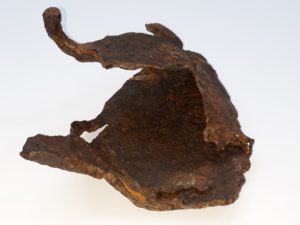 Our Object of the Month for July has been chosen by Carolyn Wingfield, Curator

Iron hipposandals (soleae ferreae) were removable temporary horseshoes, which were used to protect the hooves of working horses.  They were first introduced in the Celtic-Roman area north of the Alps in the mid-1st century AD and were in use until around the 5th century AD, when they were largely replaced by nailed on horseshoes.

The iron soles of the hipposandals were marked with grooves, with an oval-shaped thick metal cup above that, which would have enclosed and protected the hoof. They were fastened to the horse using metallic clips and leather laces.  This particular example from our collections has the back wings and upper frontal loop missing.

Wearing Hipposandals gave working horses’ better traction and protected their hooves, particularly on rough ground and metalled tracks. Wearing them greatly improved the efficiency and resilience of the animals.  There were also versions known as kureisen (cure shoes) which were worn to help treat and protect a horse if it had diseased hooves.

The word hipposandal is derived from Ancient Greek as the word “hippos” means horse. Hence the word “hippodrome,” which we now use to mean a theatre, but which originally was the name for an ancient Greek stadium for horse and chariot racing.

Where did this one come from?

This item was donated to the Museum in 1985 by a metal-detectorist and researcher along with a collection of shell and pottery fragments (which included sherds of Nene Valley fine-ware) and belemnite fossils all collected in the same area of Wixoe.

Wixoe is a village in West Suffolk, located on the bank of the River Stour, 2 miles south-east of Haverhill. It was recorded in the Domesday Book as having covered 600 acres and was one of the smallest parishes in the hundred of Risbridge.  Today, many of its cottages are Victorian and it has a 12th century church, St Leonard’s.

Roman remains have been frequently found in the vicinity of Wixoe, mostly on the Essex side of the Stour. In 1803, close to Watsoe Bridge, an earthwork enclosure was identified as a ‘camp’, along with two cemeteries.  In 1973 aerial photography showed many large pits, two streets and a building with flint foundations, close to the river.  Field-walking and metal detection over many years have revealed multiple finds of Roman coins and other artefacts, including brooches, figurines, pottery.

The assumption of archaeologists and historians is that Wixoe in Roman times occupied between 12 and 24 hectares, and was one of eight small Roman towns in Suffolk, which included Icklingham, Long Melford and Felixstowe.

In 2011, on the Suffolk side of the Stour, archaeological surveying and excavation work undertaken during the Abberton pipeline installation, revealed a small town which was likely to have been occupied between 100-400 AD. Its road connections were the real advantage of the town’s location.

The Via Devana, a military track, which ran from Chester to Colchester, would have passed through Wixoe. Another road would have led east from Wixoe, on the north side of the Stour, passing through Long Melford, before heading north-east to Baylham and probably on to Dunwich.  A third road led north, probably towards Icklingham and the Icknield Way.  A fourth road, close to the Ains Ford, is thought to have run towards the major Roman fort at Great Chesterford, on a more southerly section of the Icknield Way.  There is no clear trace of these roads immediately outside Wixoe, but it is likely that they have been eroded by ploughing or incorporated into the existing field boundaries.  Evidence suggests that the Stour may have also been navigable as far as Wixoe by flat-bottomed boats.  There may even have been a wharf there at one time.

The town appears to have been a planned rural commercial centre, rather than one which evolved naturally from an earlier settlement. It is most likely that it was built after the Boudiccan revolt and sacking of Camulodunum (Colchester) in AD60-61.  The archaeological evidence suggests that its wealth was focussed on industrial production relying on local timber (charcoal) and imported metals.  It appears to have consisted of largely timber-framed domestic buildings, with evidence of courtyards, boundary ditches, industrial ovens and hearths showing the remains of lead and iron workings, with cobbled surfaces and pits used for quarrying.

Use of horses in Roman Britain

The Romans used horses primarily for battle; horsemen fought as a secondary force to the infantry soldiers. They would have initially fought on the wings of the battle formation.  It was the job of the cavalry to prevent the enemy from outflanking the infantry, who would have been positioned in the centre of the formation.  When the Romans turned a battle in their favour and the enemy began to retreat, the cavalry would then move forward to cut them down.  The use of horses in battle enabled the Roman army to move faster and more efficiently.  Horse riders also played other crucial non battle roles for example couriering urgent messages and acting as scouts investigating new territories.

In Romano-Britain, horses were used in the majority of agricultural processes as draught animals, alongside donkeys and oxen. In industrial processes their walking motion would have been used to power heavy machinery, for example in milling flour or operating a saw mill.

The majority of Romano-British people would have travelled on foot, but those who were wealthier such as merchants would have used horses for transport, as did the military and government. Rest stops would have provided those travelling long distances with a chance to rest and change horses.

In ancient Rome, chariot racing was extremely popular. Races were held in what was called a “circus” because of the oval shape of the stadium.  The most famous and oldest of these is the Circus Maximus in Rome.  The closest chariot racing circuit in Romano-Britain would have been the Camulodunum Circus (Colchester). The Romans loved a spectacle and in addition to the chariot racing they would have also had hunting shows, where venatores, often on horseback themselves, would have hunted herds of wild animals including horses for the assembled audience’s enjoyment. 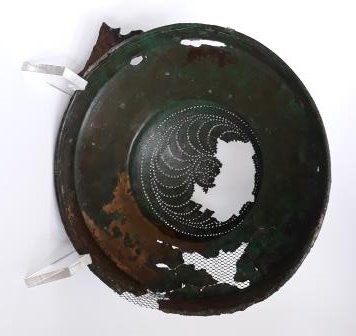 October’s Object of the Month is a Roman wine strainer chosen by Carolyn Wingfield, Curator

An Essential Accessory for Wine Drinkers

This fragile bronze vessel was described as a “Roman Bronze colander – origin unknown” in the Museum’s registers when it was acquired in 1927. It was among a list of diverse archaeological, historical and ethnographic objects given by George Morris of The Friends’ School, Saffron Walden. It measures nearly 15cms in diameter and the tiny holes piercing the central bowl form a delicate pattern.

Too delicate to be a colander, it is more accurately described as a wine strainer, which would have been used to filter sediment from wine. It is of fine workmanship, though a little damaged and has in the past been repaired with plastic mesh to support the paper-thin edges where some pieces are missing. The handle is also largely missing, although the end adjoining the pan is visible, repaired in the past with modern solder.

We can now place this wine strainer in context, thanks to finds of similar vessels, often accompanying small Roman bronze saucepans know as trullei (singular, trulleus). Trullei were part of the standard equipment of Roman legionaries, but wine strainers were not everyday items issued to Roman troops, and strainers like ours could have been made in Britain. There are examples of strainers been buried with trullei or bronze bowls, for instance the Kingdtone Deverell hoard, discovered in 2005 and now in Salisbury Museum, and the Langstone hoard from Newport, Wales, found in 2007. The Langstone hoard may have been a ritual deposit made by Britons, but elsewhere, strainers and bronze vessels have been found in graves, as part of the feasting and drinking equipment which accompanied the social elite of late Iron Age and early Roman Britain to the next world.

Certainly at the top of Iron Age society in the Essex region, there were people enjoying wine imported from the Roman world as much as a century before the Claudian invasion of AD 43. We know this from high-status graves where wine amphorae were buried, and you can see examples of such amphorae in Saffron Walden Museum. So our wine strainer could date to around the 1st century AD, either just before or after the Roman conquest. It is a pity that we do not know where it was found, but we can imagine a local British aristocrat using this as part of a wine-drinking ceremony or special feast. 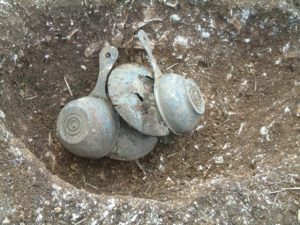 The wine strainer is on display at the Museum until 1st November 2018, where you can learn more about this object and life in Roman times.