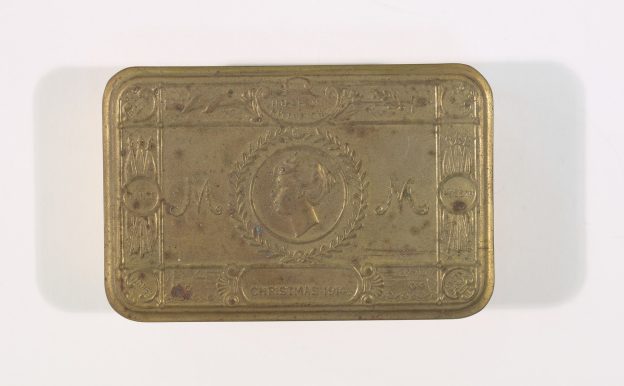 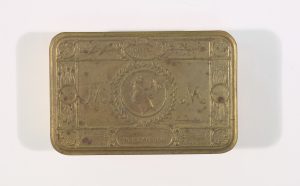 1914 Christmas Gift Box for the Troops

The Museum’s ‘Object of the Month’ provides an opportunity to  explore interesting and unusual objects from our stores.

December’s Object of the Month chosen by Jenny Oxley, Collections Officer (Human History) is a Princess Mary Christmas gift box, an embossed and monogrammed tin which was intended to be distributed to all members of the armed forces of the British Empire on Christmas day 1914, during World War I.

Following the outbreak of the First World War in August 1914, the British Expeditionary Force was sent to the Western Front and was soon joined by troops from the Empire, those from India arriving before the end of the year.  In October 1914, George V’s 17-year-old daughter, Mary, Princess Royal, launched a public appeal to fund every member of the armed forces receiving a Christmas gift.  Shortly before Christmas 1914, advertisements were placed in the British press seeking donations for the “Soldiers and Sailors Christmas fund” and £513,000 was quickly raised.

The funding was used to manufacture small boxes made of silver for officers and brass for all others.  However, there were metal shortages.  Supplies of 45 tons of brass strip, destined to make more boxes, was lost in May 1915 when RMS Lusitania was sunk off Ireland on passage from the USA.  In the latter stages of the war when metal became even more scarce, some of the tins were made from plated base metals or alloys.

Each tin was decorated with an image of Mary and other military and imperial symbols.  They were typically filled with an ounce of pipe tobacco, a packet of cigarettes in a yellow monogrammed wrapper, a pipe, a tinder cigarette lighter, and a Christmas card and photograph from Princess Mary.  Some contained sweets, chocolates, and lemon drops.   There were also variations on the contents of the boxes for non-smokers, who received a packet of acid tablets, a khaki writing set comprising a case with pencil, paper and envelopes.

The smokers’ and non-smokers’ gifts were both deemed unacceptable by the committee for nurses at the front in France who were instead offered the box, a packet of chocolate and the card.

However, suppliers of the content items had trouble and it was realised that there were still not enough to go round. The Committee resolved the problem by hurriedly buying in an assortment of substitute gifts: bullet pencil cases, tobacco pouches, shaving brushes, combs, pencil cases with packets of postcards, knives, scissors, cigarette cases and purses.  Those sailors who should also have received the lighter as part of their gift, were given instead, a handsome bullet pencil in a silver cartridge case which bore Princess Mary’s monogram. The ‘pencil bullet’ was not fashioned out of real bullet parts – it was simply a pencil with a rounded white metal end that looked like an unfired round when stored inside a brass tube resembling a cartridge case.

The boxes were originally intended for “every sailor afloat and every soldier at the front” on Christmas day 1914, but with the charity fun in surplus and some feeling that they had been left out, eligibility was soon extended to everyone “wearing the King’s uniform on Christmas day”, later prisoners of war were included, as well as the next of kin of 1914 casualties.  It is estimated that 400,000 were delivered by Christmas 1914, with full distribution completed in 1920, by which time approximately 2.5 million had been delivered.

A Princess Mary Gift Fund Box was a treasured possession of many veteran soldiers of the First World War, even when the original contents – usually cigarettes and rolling tobacco – had long been used. The embossed brass box was air-tight, and made a useful container for money, tobacco, papers and photographs, so was often carried through subsequent service.  Some troops repacked their tins and sent them home to their wives and families.