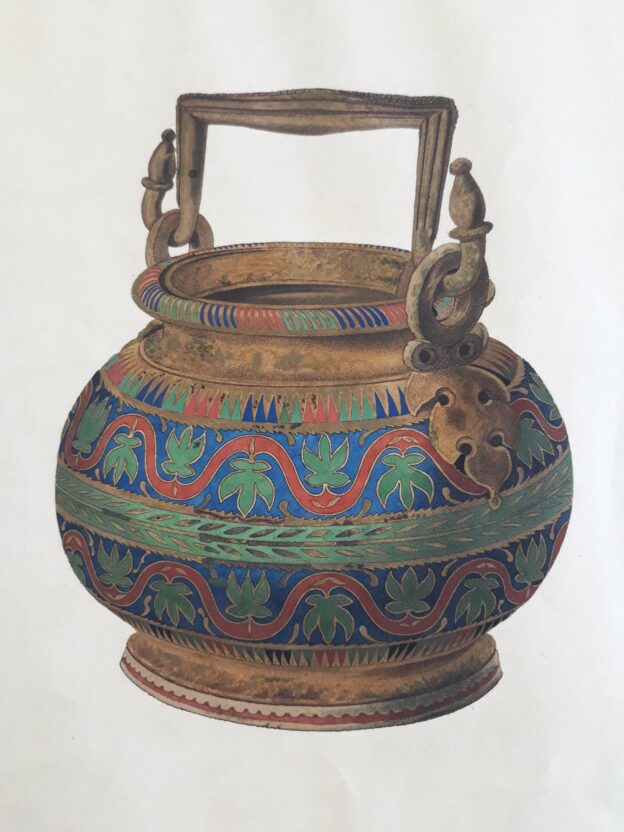 The current exhibition All Fired Up! prompts us to consider the local history which has been lost in fires. The fire of 1847 at Great Easton Lodge destroyed some of the most remarkable Roman artefacts ever discovered in the area, from the lavish burials under mounds of Romano-British aristocrats at Bartlow Hills, on the Essex / Cambridgeshire border. Fortunately the finds had been illustrated and published between 1832 and 1840, so we have a good idea of the contents of these great burial mounds, and the luxury goods which were accompanied the dead.

Between 1832 and 1840, the barrows were excavated by John Gage (later known as John Gage Rokewood) for the landowner Henry, Viscount Maynard of Easton Lodge near Dunmow. Saffron Walden Museum’s archives include copies of the original illustrations, published in the journal Archaeologia by the Society of Antiquaries of London, and also large watercolour copies made in 1885 for display in the Museum by its first professional curator, George Nathan Maynard (not related to Viscount Maynard). This selection of images from the Museum’s archives shows just some of wonderful objects discovered, all dating from the first or second centuries AD. 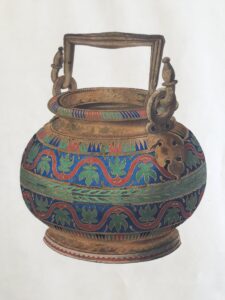 A unique bronze enamelled vessel, like a miniature cauldron. This did survive the 1847 fire, though damaged, and was acquired by the British Museum. Saffron Walden Museum has a 19th-century painted plaster copy. (Society of Antiquaries, 1836) 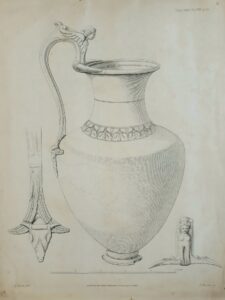 This beautifully-decorated bronze jug was for serving wine at table. A similar ornate bronze jug was excavated from a burial at Stansted Airport in the late 1980s and is displayed in Saffron Walden Museum. (Society of Antiquaries, 1836) 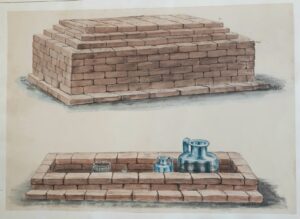 At the heart of one barrow a burial chamber had been constructed of tiles and contained cremated remains in a glass urn, with other vessels. (Watercolour by G N Maynard 1885) 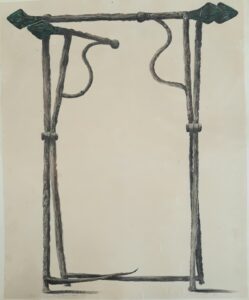 A rare folding stool with an iron frame and bronze terminals. When excavated, it still had remains of the leather straps which formed the seat. (Watercolour by G N Maynard 1885) 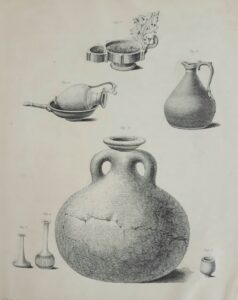 A bronze oil lamp, with other bronze, glass and pottery vessels recovered from one barrow. It is likely that lighted oil lamps were placed in the graves as part of the burial ritual. (Society of Antiquaries, 1836) 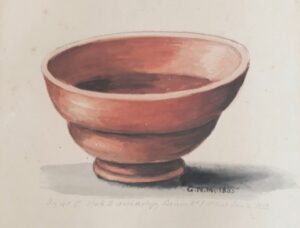 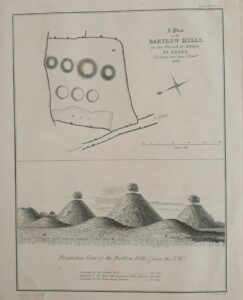 There were seven barrows originally, though some were damaged by agriculture. The largest survives to a height of 15 metres, making it the tallest Roman barrow in western Europe. Today the site is a scheduled monument and can be accessed via public footpaths from the Bartlow-Ashdon road and Bartlow parish church. Saffron Walden Museum also has a few objects from one barrow discovered during earlier investigations in 1815 by Sir Busic Harwood, a Cambridge physician who loved nearby.