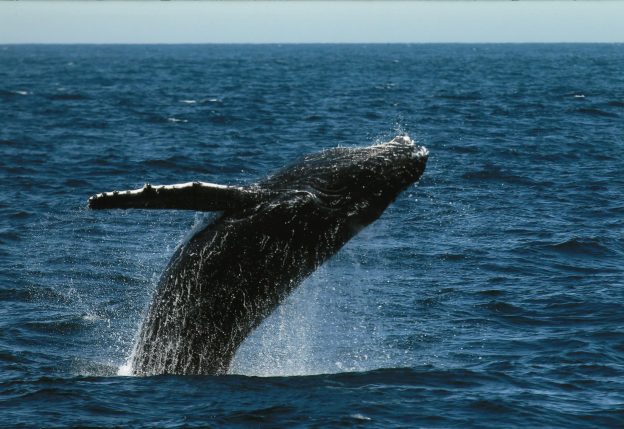 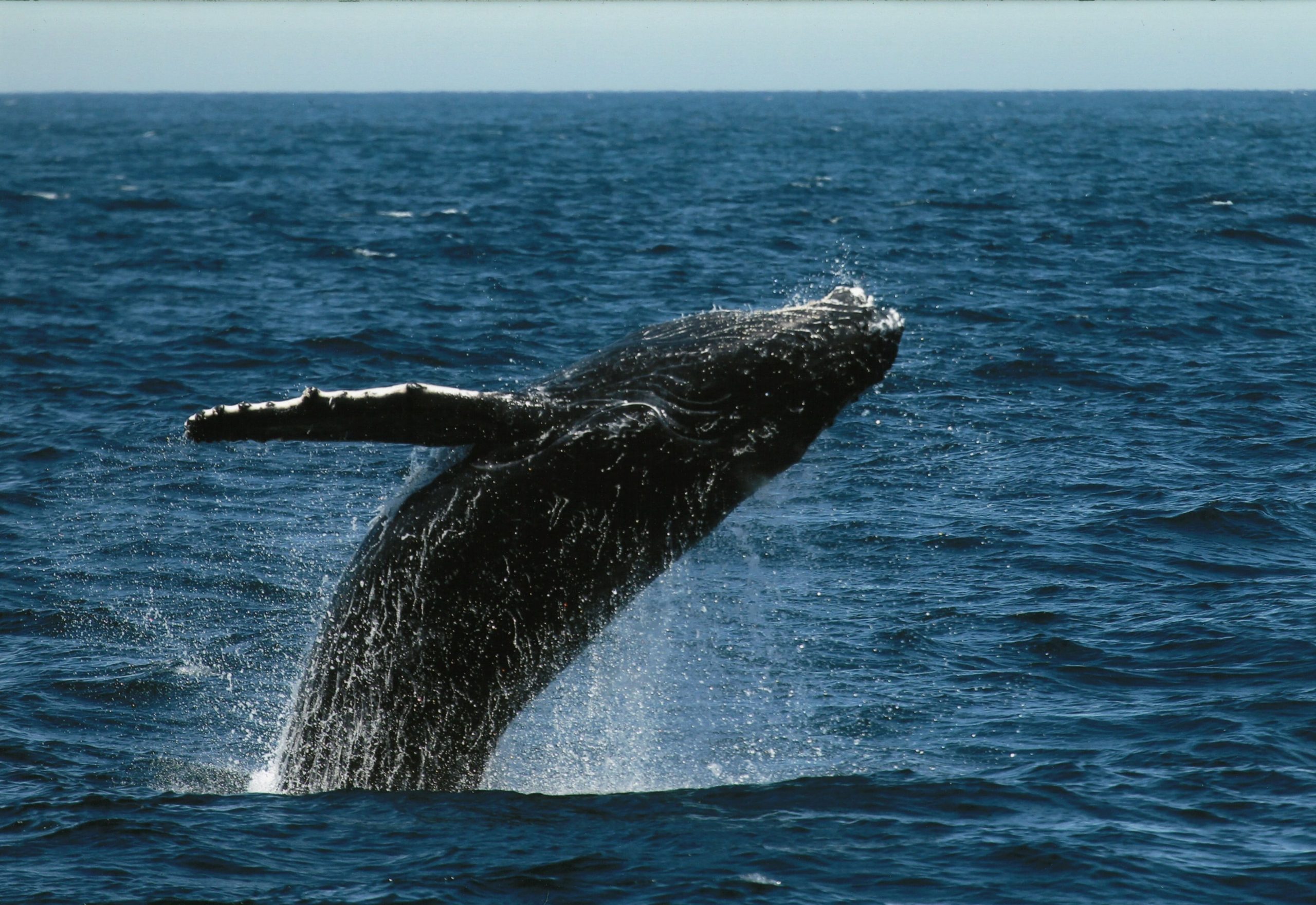 Barry took and kept over 72,000 photographs in his lifetime, almost all of wildlife and the countryside. Barry grew up in Buckinghamshire but his first job was at Jersey Zoo, working for the famous naturalist Gerald Durrell.
When he returned to the UK, Barry joined Essex police and was posted to Thaxted, where he began duties as Wildlife Crime Officer and, later, Wildlife Liaison Coordinator for Essex. His photographs from all over the world are a modern treasure in the Museum’s collection, which also includes two slide projectors which he used when giving talks – up to 250 times a year (that’s 5 per week)!
Barry’s wife Pat very kindly donated his photographs and equipment following his death in 2016.

Humpback whales live in oceans all over the world, except the far north of the Arctic Ocean and around Antarctica in the Southern Ocean, where the sea is covered in ice. Whales are mammals, so sea ice stops them coming to the surface to breathe air.
They are grouped into four major populations in the north Pacific Ocean, Atlantic Ocean, Southern Ocean and Indian Ocean. They usually migrate between summer and winter ranges, but there are year-round groups around Britain and Norway, and in the Arabian Sea between India and east Africa.

– They can grow up to 16 metres long
Humpbacks are one of the largest whale species. Females are slightly larger than males, usually up to 16m (50ft) long. They can weigh 30 tonnes – the same as 2½ double-decker buses.

This picture shows the size of a humpback whale compared to a human swimming next to it, and its long pectoral fins. Image: Jjw, CC BY-SA 4.0 via Wikimedia Commons

– They have ‘big wings’
The scientific name of the humpback whale, Megaptera novaeangliae, means ‘big wing of New England’. Their ‘big wings’ are their giant pectoral fins – one female had fins that were 6m (20ft) long, as tall as a giraffe!
The ‘New England’ part comes from where humpback whales were first discovered by European whalers, off the coast of New England in the far north-east of the USA.

– Each animal’s tail is unique
A whale’s tail is called a fluke, and has a wavy pattern along the rear edge. Like our fingerprints, this wavy pattern is unique to each whale and is an easy way to identify animals in a group.
Compare this image to Barry Kaufmann-Wright’s photograph of a humpback’s fluke, above. 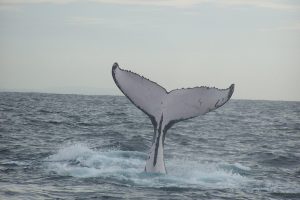 – They use nets to catch fish
Humpbacks migrate between summer and winter ranges and only eat for 6 months of the year, in the cooler waters of their summer range. Hunting and eating for 22 hours a day means they can build up enough fat reserves to survive their winter breeding season without eating.
Some populations of humpbacks have learned to feed in groups using the ‘bubble net’ technique and use vocal calls to work together. The whales swim in circles below a school of fish, blowing bubbles from their blowholes to create a ‘net’ that the fish won’t swim through. When one whale gives a feeding call, all the whales swim upwards inside the net with their mouths open to catch the fish. 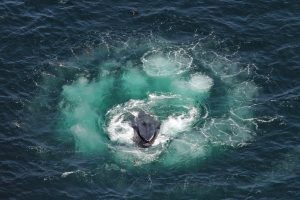 A humpback whale using the bubble net technique on its own. Image: Christin Khan, NOAA/NEFSC, Public domain, via Wikimedia Commons.

– They sieve their food
Humpbacks are one of a group of whale species called baleen whales, which have bony, comb-like plates inside their mouths. With a mouth full of water and food animals, baleen whales partly close their mouths, and push water out through the baleen plates using their tongue. The baleen lets the water through but keeps in food such as fish and krill, which the whale then swallows. 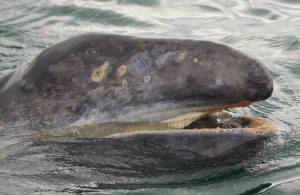 Baleen plates and bristles in the mouth of a young gray whale. Image: Marc Webber/USFWS, Public domain, via Wikimedia Commons

The North Pacific right whale is a baleen whale like the humpback.
This bone is the tympanic bulla and may have come from a North Pacific right whale. It’s a hollow shape but made of heavy, dense bone which helps sound resonate in the whale’s middle ear, inside the head. In life, it would have been attached to the petrosal bone, which has snapped off.

Smaller bones called the hammer, anvil and stirrup would sit inside the hollow space, and actually transmit the sound from the outer inner to the inner ear, just like in humans.

The North pacific right whale got its name because it is a large whale (up to 18m long but weighing 80 tons) with plenty of valuable blubber, it moved slowly, and would float after it was killed. It was the ‘right’ whale to go for because it was easy to catch and made lots of money for the whalers. 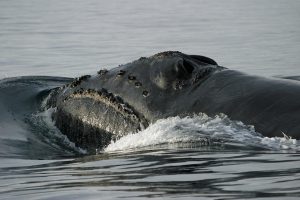 More than 15,000 were killed by whalers in the 19th and 20th centuries. Today, estimates say there are fewer than 400 North Pacific right whales left, split between an eastern and a western population, making them the smallest known population of all whale species, As a whole, they are listed as Endangered on the IUCN red list, while the eastern population is Critically Endangered, with less than 40 animals.

Use this link to listen to a song about the dangers of whaling, based on the songwriter’s own experiences in Australia in the 1950s – www.swmuseumlearning.com/general-5